Cory and his brother Jeremy, were the first people ever born on this earth I can remember, since you must realize that I was only 3 years old when my brother Tyler was born. Over time and with numerous visits, there came growth and a very special bond among us. Although we did not see the “Golis Gang” as much as we wanted to, each visit picked up were the last had ended; good times, laughter, car talk, bike talk, and overall good male bonding.

Cory and Jeremy were remarkable in the way they could hang out with my brothers and me even though a decade separated us. Cory had a demeanor, intellect, and sense of humor far more evolved than other kids his age. I see myself as an always aspiring comic, and am very critical of other peoples material; especially those younger than me. Even with this in mind I could not help myself but to laugh with and at Cory. He had an incredible zest for life and laughter. Note: I don’t like writing anything in the past tense, because he will always be such a big part of our lives. The first time Cory met my wife, girlfriend at the time, he walked right up to her at 14 years of age and said “hi Nandell, my name is Cory”; without a moment’s hesitation or reluctance. This ability to interact with others is greatly missed. 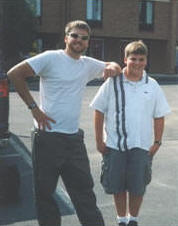 His caring and compassion for others were evident in what he was doing for the Anchor House Ride for Runaways. Most teenagers, including myself (back in the 80’s & early 90’s), are far too worried about our own needs and problems to consider raising all that money and riding half way across the eastern seaboard for someone else.
I know Cory is with each and everyone of those who do the Anchor Rides and that he is truly appreciative of your efforts.

Cory wrote this unedited story the Fall of 1997, as a 15 year old, when his Grandfather died of Alzheimer’s disease.  It teaches us a great deal how much Cory loved his Grandfather and how well he could express his love for him.  Cory’s work also gives us great insight about how Cory approached both life and death. He was many years ahead of his time, both with his perception and with his level of maturity………..”though it will never be the same without him, I can always recall how it was, and be with him”.  Speaking as Cory’s father, there is still such a huge void not having Cory with us, but reading his “Poppi Story” does bring great comfort.

Good bye,” I said to Poppi, squeezing his leather moccasin.  The smell of leather.   His face was still, eyes open and clean shaven.  He clutched the wool blanket with his shaking old hands.  He showed no response.  He did not recognize me as his youngest of seven grandsons or as a person standing in the room.  Jazz was playing softly on the old beige radio, a jumpy song, I was not jumpy.  This would be the last time I would see him alive. It was hard to say good-bye and deal with the fact that my Grandfather was slowly dying from Alzheimer’s disease.  At least he was in Maine.  It was his favorite place to be.  It was where he would like to be right now.  He has lived up here for many years with my Grandmother.

“Cory, you are the first to hear this,” my Mom said, coming out of the porch door with the phone in her hand.   “Poppi just passed away.”  I was not shocked, startled or surprised.  No sensation or sadness. I shed no tears after Poppi’s death.  I had time to mourn when he was declining.  Now, I worried for my Grandmother and how she was taking it.

The LeBaron, Poppi’s last car. It was passed down to my brother, his first car. This resembled a passing of generations for me.  I have a lot of memories with that car and Poppi. With just the smell of it, I can recall a lot.  This convertible had leather interior.  The smell of leather.  Poppi also loved woods.  Working with his hands, making birdhouses and other things.  He had many machines, drills, saws and tools. His favorite hobby.  About a year ago, it was declared that he could not drive and the tools were off limits for his own safety. The LeBaron rested in the garage and the woodworking room was locked.

My parents knew that he was going to pass away around the day that he did die.  I knew this too because the funeral had already begun to be planned.  The funeral would be in Bath, Maine. That is also where Poppi’s ashes would be buried.  All of my relatives on my Mom’s side would be there, aunts, uncles and cousins. I knew the funeral was going to be very emotional.

To me, seeing the funeral of my Grandfather meant more to me than any test or exam.  I have always been told that school comes first, but how can you compare school with family.  It is impossible, an eternal debate.  School is very important.  My first impression was, “A funeral for someone happens once, no more.  School happens 180 times a year.”

My parents disagreed.  I had said good bye, all that is left is tears, pain, and many memories.  Many memories, many that are so vivid that I feel that I can talk to Poppi and he listens to me.  Many memories, some that I can see Poppi lying there with a disease that has no cure. I felt that staying home was the thing to do.  I felt this way not only because my parents, I felt this way because I would be reminded of the final moments and I could not do that again.

My parents confronted me.  They knew what the answer was going to be but I knew that they wanted me to say it, mean it, and understand it.  I told them my decision and my Dad told me something.  He said, “I want you to write a little thing that your Mother and I can bring to the funeral so that we can share some of your words.”  It was a good idea but it was hard to write.  This took more soul-searching for me than the actual decision.

“So,” I said, “how was the funeral?”   “Well, ”my Mom said, “As soon as you walk in……….”She talked about the service.  Since she is a florist, she talked about every little flower arrangement there.  She also said the trip up and back was tedious because they had to pick up my cousin in New York City.  She said that she was crying so much she could not read the paper I wrote in front of everyone. My Dad read it instead.

It had touched me to hear that my words touched people far away.  I learned that when a loved one passes away, it is best to hold onto the memories that are wonderful and alive.  I can accept the fact that Poppi died and I can always remember his face and personality any time I want.  Though it will never be the same without him, I can always recall how it was, and be with him. (Fall, 1997)